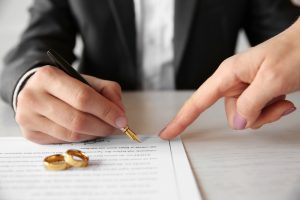 For a happy couple contemplating marriage and planning for the big day, a discussion related to divorce and death is usually not a top priority on the to-do list. However, consideration of a prenuptial agreement which can protect important property and financial interests requires that talk. Therefore, knowing what is a prenup and understanding its benefits are important to your financial future. A prenuptial or premarital agreement, also known as a prenup, is simply a written contract between two people planning to be married outlining use or disposition of property and distribution of debts in the event of divorce, the death of a spouse or other event.

Premarital agreements trace their origins back thousands of years when they were commonly used by royal families to protect their riches. A present-day misconception is that prenups are only necessary for the wealthy. In reality, prenups can be vital and provide benefits for people of moderate means.

Prenups are valid in all 50 states. More than half the states have adopted the Uniform Premarital Agreement Act drafted in 1983. States which have not adopted the act in whole have enacted statutes which mirror many of the law’s provisions.

A well-drafted agreement can limit legal disputes and court involvement in the event of a future separation. This can save time and money and limit some of the emotional distress caused by divorce. A prenup allows parties to determine how property acquired during marriage will be distributed should the marriage fail. It may designate that specific debt acquired prior to or during the marriage remain one person’s sole responsibility.

Prenuptial agreements can be particularly important when either of the parties owns property acquired prior to marriage. A prenup often provides that premarital property remains the separate property of the owner. This can help protect valuable family heirlooms as well as real estate. The agreement might restrict responsibility to the owner for maintenance, sale or lease of the property. The prenup can also address how any additions to or increase in the value of the premarital property will be handled or how property acquired after marriage is to be distributed if the premarital property was used, in part, to purchase it.

A business created and grown prior to marriage can be safeguarded by a prenup. This can protect a business or professional practice from being divided or subject to decision making by a former spouse in the event of divorce.

Expected or previously received inheritance funds can be designated the sole asset of the recipient. Ownership of joint gifts, wedding rings, and other personal property can be outlined. A prenuptial agreement might also be important for someone owning significant stocks or retirement funds or who has elderly parents who need or will require future care.

Virtually any topic the parties want to address may be included as long as the law allows it. A prenup might require one party to maintain a life insurance policy for the other upon separation. How legal fees will be paid in the event of a divorce could be included. Even care and ownership of the family pet can be established in a prenup circumventing a frequent dispute when parties separate.

Prenups can also specify actions to take place upon the occurrence of an event during the marriage. For example, the contract might include automatic termination or require payment from one spouse to another upon discovery of a spouse’s infidelity. If the death of a spouse is the triggering event, the prenup can take the place of a will. While a spouse’s will can never be less generous than a prenup, it can always provide more than designated in the premarital agreement.

The parties can declare which state law will govern the interpretation of a prenup and in what state any legal proceedings will take place if needed. Without such a designation, the prenup will be interpreted in accordance with the law of the state in which the parties reside.

The amount of spousal support to be paid in the event of separation can be set in a prenuptial agreement, but states may vary in upholding such provisions. Setting an amount of alimony to be paid can be important to a spouse who plans to limit or give up a potentially lucrative career due to marriage. The prenup can ensure compensation to the spouse in the event the marriage fails. However, if the contract provides such meager support to result in requiring a person to rely on public assistance, that provision will often be found invalid.

Bringing up a discussion of what will happen in the event of a divorce can create a lack of trust from a future spouse. A sunset clause can make a prenuptial agreement more acceptable. The agreement can specify a set number of years after which the agreement expires. Provisions thought to be important prior to marriage may no longer be deemed necessary once the union has withstood the test of time.

Specific requirements must be met to ensure a prenuptial agreement is valid and likely to be upheld in court. It must be in writing and signed prior to marriage. Signatures should be witnessed and notarized.

The prenup must be considered fair at the time it was entered into. A court will sometimes also require the agreement to be fair at the time of enforcement. Fairness depends, in part, on whether the parties made a complete disclosure of all income sources, assets and debts. The prenup usually contains a clause by which both parties attest that there has been full disclosure. To ensure the fact, a written financial statement listing all properties, financial accounts and liabilities is usually attached to the agreement. Certain states require the same.

The prenup must be entered into voluntarily and without undue pressure. This generally requires the agreement to be written and reviewed well in advance of the wedding date and that both parties have adequate time for review by independent legal counsel. One party should never present a prenup to a fiancée mere days before the wedding nor should the couple rely on one attorney. While it is not legally required that each person have the contract reviewed by a separate attorney, the opportunity to do so must be allowed. Consequently, some states require that if a party does not have legal representation, the agreement must clearly state that said party is knowingly waving his or her right to the same.

The agreement should include a severability clause stating that if one provision of the contract is deemed invalid, the balance of the prenup remains in effect. Finally, the prenup should include a declaration that both parties have carefully reviewed the agreement, believe it to be fair and equitable and have signed it freely and voluntarily.

Rather than avoiding discussion of a prenuptial agreement for fear of causing tension, the conversation should be approached as a positive step. This requires future spouses to discuss their financial status in detail, something a couple about to be married should be doing in any event. Even if a prenup is never drafted, it is always wise to know what financial obligations and assets each party brings to the marriage, a union which is often as much financial as emotional. Parties should not attempt to draft and sign a prenup on their own. It is important to have skilled prenuptial lawyer. If contemplating marriage and you have questions about what is a prenup and if it is right for you, call the Law Offices of Peter Van Aulen at (201) 845-7400 for a free initial consultation.