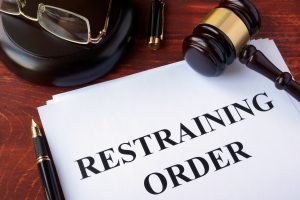 Domestic violence (DV) is a serious problem. Every state has a procedure in place that allows persons to obtain protection or restraining orders intended to prevent contact from alleged abusers. The process to initially obtain a protection order is fairly quick and simple. A person can usually go to a county courthouse, write out a short statement explaining what happened and why an order is necessary, present the paperwork to a judge and obtain a temporary order within a few hours .In some jurisdictions if the incident just happen a person can start the process by calling the police department.

The restraining order is usually served by law enforcement on the person being restrained. Temporary orders are typically effective for 10-14 days at which time a formal court hearing takes place giving the restrained person an opportunity to respond, present evidence and contest the order. After hearing arguments from both sides, a judge will either dismiss the case or sign an order which can last for an indefinite period.

While the system is designed to provide quick assistance to victims of domestic violence, this process can easily be abused by making false accusations that can result in devastating results for the person accused. Since it only takes one person’s statement without any supporting evidence to get a temporary restraining order, the target of that order may immediately lose access to a home, property and children and suffer damage to his or her reputation.

Accusations of domestic violence may impact issues of alimony and child custody in divorce cases. False accusations are more likely to be made when a divorce is about to be filed or has just been initiated. When a contentious divorce is anticipated, a spouse may believe he or she will obtain an advantage by filing for a protection order.

In reviewing petitions for restraining orders, judges tend to err on the side of being safe even if evidence of a domestic violence act is minimal. Preventing the temporary order from being extended requires an aggressive, well-documented approach.

Don’t violate the order. The top priority is to avoid violating the restraining order in any way. A natural response when served with a temporary order is anger and often a desire to contact the person who obtained the order. Don’t do it. Contact will violate the order and will often result in a criminal charge. At the very least, improper contact will be noted at the formal hearing and will likely add support to a petitioner’s allegations.

Seek legal counsel. Anyone accused of domestic violence should obtain legal assistance. Since restraining order proceedings are civil rather than criminal, attorneys are not appointed at government expense. The respondent or defendant must hire an attorney if they want to be represented by an attorney. Investment in an attorney experienced in dealing with protection orders is often well worth it to be fully prepared. Preparation for hearing must be thorough to have any chance of defeating a protection order petition. If the hearing becomes no more than a “he said, she said” contest, an extended order is likely to be granted. The respondent or defendant must challenge the accusations with supporting evidence.

Gather relevant documents and evidence. The respondent or defendant should receive the petitioner’s initial statement requesting a protection order when served with the temporary order. The task is to address every allegation made and find ways to challenge each one.

Depending on the facts alleged, a respondent or defendant should request the following items if the court allows the same: (1) any medical reports if treatment for injury was sought; (2) copies of any photos, text messages, e-mails or other evidence referenced in the petition; (3) police reports if law enforcement was involved; (4) any additional written statements made by the petitioner or witnesses named by the petitioner.

Be sure that text messages or e-mails provided by the petitioner are not taken out of context and simply selected to support petitioner’s claims. Provide the full string of relevant texts or e-mails when needed to demonstrate an accurate representation. If children are involved, obtain relevant school and counseling records.

Subpoena any friendly witnesses of the alleged incidents. Obtain your phone records to dispute claims that harassing calls were constantly being made.  GPS records for your vehicle may be helpful when an accusation alleges frequent driving by the petitioner’s home or work.

Obtain videos, records or other documentation that prove you were at another location at the time the alleged incident took place. If the petitioner has a history of requesting restraining orders, particularly if petitions were dismissed, obtain copies of the petitions and orders. A court’s prior determination that a petition included false accusations could help boost your defense.If you were a victim of domestic violence by the acts of the plaintiff consider filing a retraining order against him or her.

Dress for court like you would for a work interview. Regardless of what is said, remain calm. Venting anger will only provide ammunition to the petitioner. Be honest if asked a question. Your case will be severely weakened if the judge catches you in a lie. The goal is to cast doubt on the petitioner’s truthfulness.

Whatever the outcome, control your emotions. If you have an attorney, you can discuss next steps outside the courtroom. Restraining order hearings are usually fairly short, and judges will often consider numerous petitions during a court session. You may feel your case did not get the attention it deserved. If so, your next step may be to appeal to a higher court.

Restraining orders serve an important purpose to safeguard true victims of domestic violence. However, persons can easily be falsely accused and should take every step possible to clear their name and reputation. Obtaining legal assistance and crafting a thorough, detailed response countering each allegation with evidence is the best approach. If you have any questions concerning a restraining order in New Jersey, call the Law Offices of Peter Van Aulen at (201) 845-7400 for in office consultation.